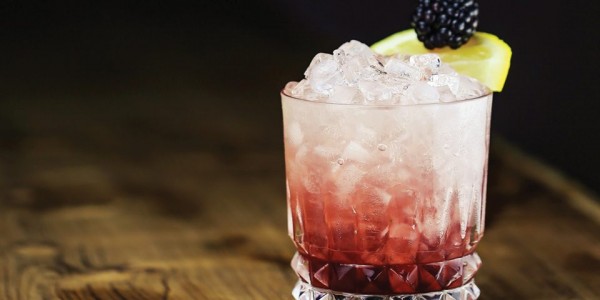 I know what you’re thinking - we definitely don’t need an excuse to celebrate everyone’s favourite party partner in crime - but actually we do. How often does the humble cocktail go overlooked, pushed aside in favour of a glass of fizz or a gin and tonic. Well not on this day. This day is the cocktail’s own. And we’re choosing to celebrate by digging up the British-born cocktails that have made their way around the world. As the timeless quote goes “we may be a small country, but we are a great one.” - and straight after David Beckham’s left foot comes the Espresso Martini, the Hanky Panky & the Bramble.
The Espresso Martini
Incase you haven’t read our Cinco de Mayo blog and don’t know the story of the Espresso Martini, let me refresh your memory - created by cocktail guru, Dick Bradsell at Fred’s Club in the late ‘80s, bartending Apocrypha goes that a young model, who is now world famous, asked him for something to “wake me up and f*ck me up” - and the frothy, bittersweet beverage that’s fuelled a million nights out was born.

Add all of the ingredients to a shaker filled with ice and shake. Fine-strain into a chilled coupette or martini glass, and garnish with 3 coffee beans

Hanky Panky
An elegant and sultry cocktail is a symbol of girl power, as its creator, the late great, Ada ‘Coley’ Coleman was the first (and only to date) female head bartender at The Savoy’s American Bar. Ada said of the drink… “The late Charles Hawtrey… was one of the best judges of cocktails that I knew. Some years ago, when he was over working, he used to come into the bar and say, ‘Coley, I am tired. Give me something with a bit of punch in it.’ It was for him that I spent hours experimenting until I had invented a new cocktail. The next time he came in, I told him I had a new drink for him. He sipped it, and, draining the glass, he said, ‘By Jove! That is the real hanky-panky!’ And Hanky-Panky it has been called ever since.”

Add all the ingredients to a mixing glass and fill with ice. Stir, and strain into a chilled coupette or martini glass and garnish with an orange twist.

Bramble
Another modern classic from Dick Bradsell, created in the 80s at Fred’s Club - he created the drink because he wanted to invent a truly British drink but notes that he failed in his task as lemons are of course not native to our cloudy climes. The drink is essentially a gin sour, enhanced by crème de mûre (or black raspberry liqueur as we have here)- he drew inspiration from his childhood for the drink - growing up on the Isle of Wight, foraging for blackberries and dodging prickly brambles. It has been said that due to the winding path the liqueur takes through the drink through the glass - as though it was dodging through brambles!

Add the gin, lemon juice and simple syrup in a shaker with ice and shake. Fine-strain into an Old Fashioned glass over crushed ice. Lace over top with the crème de mûre. Garnish with a lemon half-wheel or a fresh blackberry.

Have you tried all these cocktails? If you have a go at making them then be sure to let us know your fave!