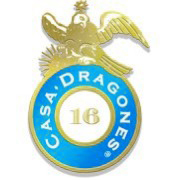 The Dragones, after whom this luxury brand of tequila is named, were an elite cavalry unit that helped influence the independence movement from Spain during the Mexican War of Independence (1810-1821). Casa Dragones harvests its agaves from the rich fertile lands in the Valley of Tequila, Mexico.

Said to be a favourite tipple of Oprah Winfrey, after blending silver and extra aged tequila that has rested in American Oak barrels for over 5 years, the final result is a uniquely balanced, complex, smooth tasting tequila.