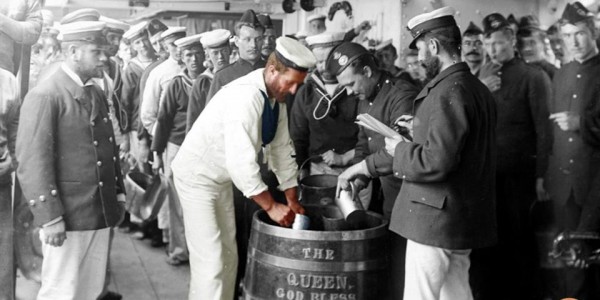 For more than 300 years, the brave sailors of the Royal Navy were issued a daily ration of rum, known as a 'tot'. This tradition, one of the longest running in military history, was carried out from 1655 all the way until August 1st, 1970 - otherwise known as 'Black Tot Day'.

Of course, nowadays the Royal Navy is less about cutlasses and cannonballs, more tech and torpedoes. It's a professional body of people that really, really need to be sober. Really. Which is exactly why rum rationing was abolished in the 70s. But how did it even start?

In the days before refrigeration, any food that could last long enough to be 'enjoyed' on long voyages was at best bland and at worst sort of rotten. According to sailors at the time, even the water in casks would often develop algae and taste putrid and sour. Yummy. This meant that the daily tot was really one of the only tasty thing sailors got!

Also, it's no overstatement to say that life on the sea was hard, hard work. Sailors were expected to work tirelessly for months at a time, forced to do backbreaking work or face severe punishments like flogging. And if that wasn't enough, the risk of injury, disease and/or death was far greater than in many other lines of service. The demands of such a life made some kind of alcoholic ration a vital part of life on the sea.

Originally, beer or wine was used for daily rationing but these often couldn't survive in the hot and humid weather of the West Indies and Africa. Spirits like rum and brandy, however, retained their good taste and didn’t spoil - making them the perfect candidates. But why rum specifically?

Although partly due to Britain's growing political influence within the West Indies and their growing use of plantations, one of the main reasons why the Royal Navy encouraged the rum ration instead of other spirits was related to scurvy - an extremely common ailment among sailors who didn’t get enough Vitamin C. Sure, rum doesn’t naturally contain Vitamin C but it did go well with lime juice - which is jam-packed with the stuff.

Sailors weren't that partial to a Daiquiri, though. They were more inclined to drink their rum straight or, more often than not, save up their rum rations to get horrendously drunk. That's why in 1740, Admiral Sir Edward Vernon made it a requirement for lower-ranking sailors to mix their rum with water, lime, and sugar - this prevented sailors from storing their rum rations to get drunk at a later date. Of course, Senior ratings (petty officers and above) did not have to mix their rum with water and could opt to receive their rum neat. Typical.

Also, not all sailors necessarily drew rum! You had the option to be marked in the ship's books as "G" (for Grog) or "T" (for Temperance). Sailors who opted to be "T" were given threepence a day instead of the rum ration, although most preferred the rum. Obviously. Sailors under the age of 20 were the only sailors not permitted a rum ration, and were marked on the ship's books as "UA" (Under Age).

Tot glasses were kept separate from any other glasses. They were washed on the outside, but never inside, in the belief that residue of past tots would stick to the side of the glass and make the tot even stronger. The rum itself was often procured from distillers in Jamaica, Trinidad & Tobago and the British Virgin Islands. Luckily, Pusser's Rum bought the rights to the traditional Naval recipe so you can still experience the original taste.

However, like most traditions, the rum ration died a slow death. Rations were cut in half in 1823 and again in half, to the traditional amount, in 1850. Over the next century, the interest among seaman in partaking of the tot fell and, by the 1950s, only a third of navy sailors lined up for it.

The final nail in the coffin came in the 1960s with the invention of the breathalyser - A British newspaper used one to demonstrate that a sailor could still be legally drunk after consuming his ration. In 1970, Admiral Peter Hill-Norton abolished the rum ration as he felt it made sailors less capable to manage complex machinery.

The last rum ration was dispensed on 31 July 1970 and became known as Black Tot Day. Some buried the tot along with a headstone. Many threw the last tot over the side of their ships. HMS Dolphin was one of the establishments that had a gun carriage bearing a coffin that was flanked by two drummers and led by a piper playing a lament. A sad day indeed.

So, with the anniversary of Black Tot Day having just passed and National Rum day just on the horizon, how about we raise one final tot to the brave sailors of past and present. Just don't forget the lime.