We sat down with Frederik Kampman Founder of Lowlander Beer to find out more about his marvellous new brews!

1. Here at 31DOVER we like to kick things off with a thinker! If you could send a bottle of Lowlander to anyone living or dead, who would it be and why?
Well that would be Wouter Van Lis. A Dutch pharmacist would, with his knowledge of botanicals, create some amazing ingenious botanical beers in the Dutch Golden Age in the 16th Century. And whose book about botanical brewing served as inspiration for me to do a modern expression of brewing with botanicals. I would love to hear what he thinks of Lowlander.

2. We all know botanicals are a key ingredient in gin, but far more rare in beer, why make a botanical beer?
I worked on a couple of gins myself and Opihr was the gin I developed from scratch. When I was working on a new gin in the botanical room in the distillery I thought of the idea of using botanicals in beer as opposed to gin. After that I discovered that brewing with botanicals is in fact nothing new but has always been around to give flavour and character to beer. And so the idea for Lowlander was born.

3. With so many different beers to choose from, which Lowlander would you recommend for someone looking to get into botanical beer?
Well that really depends on the botanical flavour preferences. But if you are keen to try something light fruity and flowery, I would recommend the Lowlander White Ale which is brewed with chamomile, elderflower and curacao orange. If you like something a bit more bitter then our Indonesian Pale Ale brewed with coriander seeds for citrus freshness and spice and White tea for a lovely bitter finish would be perfect!

4. Low or no alcohol beer often gets a bad wrap, what's the secret to making your no alcohol beer taste so good?
In many non alcoholic beers there is often a compromise in flavour because through the technique of having to remove alcohol you also remove a lot of the flavour. We at Lowlander like to focus on what you put in (ie botanicals) as opposed to what you take out. And with the botanicals you can create some really interesting and nice flavours! 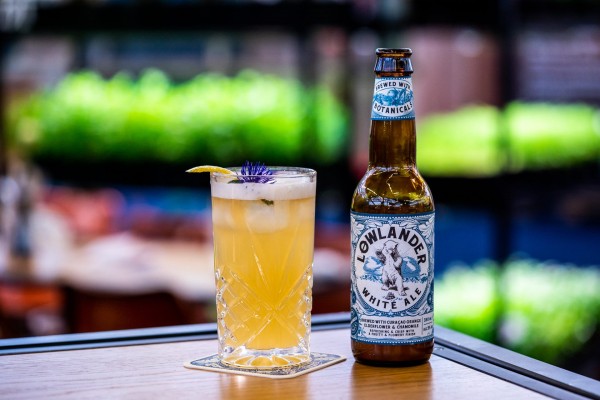 5. These day's we're all a sucker for a gorgeous label what's the story behind your beautiful bottles?
Well I worked in gin before so I guess I was a bit inspired by the beautiful designs you would see on gin bottles. Trying to do something different in beer, our labels and central illustrations are all inspired by the stories of trade and travel of the "Lowlanders" and the botanicals they brought back. Each illustration at the front is matched with an intriguing story on the back of the label.

6. And finally, if you had to pick one drink (and it can’t be made by you!) to have for the rest of your life, what would it be?
A white collins. Basically a collins but reducing the gin slightly adding our Lowlander White Ale and some elderflower liqueur, fresh lemon juice and garnished with some thyme. It is super refreshing, slightly acidic and just delicious.