The History of the Cocktail

The history of the cocktail isn’t a straightforward story.

Just as cocktail recipes, names and components have developed over the years, so too has the tale of this tipple. In the name of learning whilst we're drinking, we’ve decided to dive a little deeper and discover more about the word ‘cocktail’ itself (a little ‘etymology’ rather than ‘mixology’); when the word cocktail was first used, and what for; and to follow the journey of one of the world’s favourite drinks.

THE FIRST USE OF THE WORD COCKTAIL

The very first published definition of the word "cock-tail" appeared on 13th May 1806 in The Balance and Columbian Repository in 1806 and this historic event is now commemorated every year by World Cocktail Day. 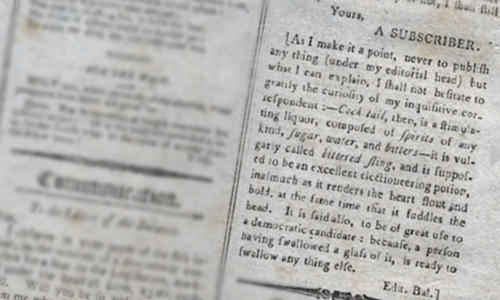 The upstate New York newspaper defined “cock-tail” as “a stimulating liquor, composed of spirits of any kind, sugar, water and bitters”. It was written by editor Harry Croswell in response to a reader’s inquiry (alongside a dose of dry wit about the day’s politicians!)

And whilst this remains the first definition of the word (to date), this wasn’t the first time “cock-tail” was used in print. At least two earlier occurrences are known to exist, the first in London’s Morning Post and Gazetteer (1798), in a satirical comment on the then Prime Minister, William Pitt, and a second in a US agricultural handbook called The Farmer’s Cabinet (1803).

The earliest example was discovered by booze historians and experts Anastatia Miller and Jared Brown, and explored further in their Spirituous Journey: A History of Drink, Book Two. The obscure note references a bar owner who won the lottery and celebrated by writing off all of his patrons’ debts. The following week the paper jokingly imagined a list of bar tabs for several politicians, including the then Prime Minister William Pitt whose order included a “cock-tail.” 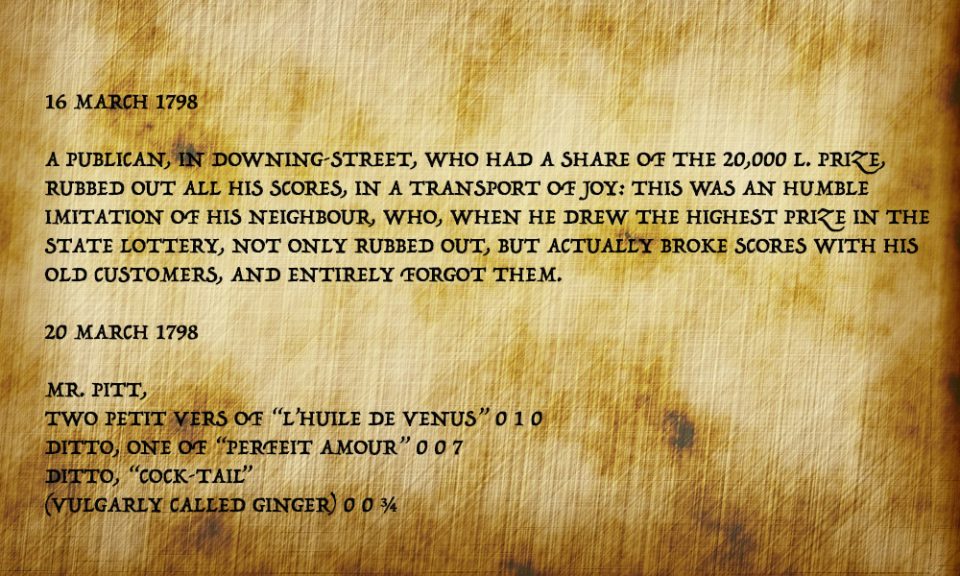 Jared admits, “exactly what this implied is open to conjecture as the most common use of the term “cocktail” at the time was in reference to a horse with its tail cut short to indicate it was of mixed breed” (More on this later…)

Considering (a) The price for the 1798 cocktail was three quarters of a penny, which is much less than for the alcohol drinks listed, and (b) Pitt had recently doubled the price of the paper with a tax (the masthead read "price 3d, taxed by Mr. Pitt 3d, total 6d.") it does seem that the newspaper’s editor could be suggesting a different meaning by the term “cock-tail” than the drink as we know it… particularly alongside what could be deemed as 'amorous' drink orders, perhaps playing on Mr Pitt's lack of wife and misdemeanours. But then again, for a double entendre to be amusing, surely the term was also being used within a 'drink' context.

Renowned drinks historian David Wondrich also unearthed a slightly earlier mention in an 1803 issue of Amherst, New Hampshire publication Farmer’s Cabinet. It features a page from the diary of a young “lounger”, notable for the line, “Drank a glass of cocktail—excellent for the head.” 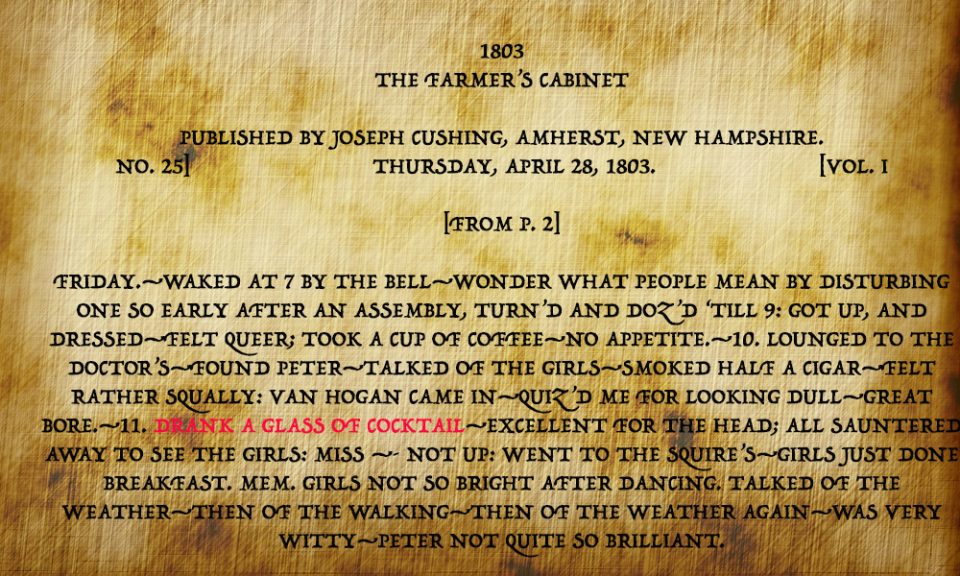 Wondrich makes the valid point “the reference I found mentions “cocktail” with no sense that it would be misunderstood by the reader; in other words, an [already] popular drink.”

But it does lack the context the 1806 article provides us with. Wondrich further argues that it is highly likely that that this isn’t the last we’ve heard of the ‘first usage’ dispute. As old newspapers, etc. get digitised, Wondrich wholly believes that earlier references will almost certainly turn up.

But for now, the Balance article is the earliest written record that not only mentions the word “cock-tail” but also gives the recipe, so it’s appropriate that theirs is the piece we celebrate on World Cocktail Day.

SO, WHERE DID THE WORD COCKTAIL COME FROM?

Ah yes. We’ve settled on the Balance article being the earliest reference of the word “cocktail” as we know it, (to date…) but the word itself was certainly around before the 1800s, even if it had a slightly different meaning.

The origins remain (surprise surprise) hotly disputed. There are numerous tall tales that explore the meaning of “cocktail” and how it came to refer to a drink. But which is correct?

Here are the four most often quoted origins.

Antoine Amédée Peychaud, a French apothecary in New Orleans, served brandy with his bitters (yes, those Peychaud bitters…) in eggcups in the late 18th century. As a result, the word "cocktail" is thought to have come from a mispronunciation of the French word for eggcup, 'coquetier' (pronounced cocktay in English).

"Cock tailings" was a term used to describe the mixture that was created when tavern owners combined the dregs (tailings) of nearly empty barrels together. The resulting mixture from several barrels would then be sold at a discounted price. The word "cock" was used to refer to the plug/tap of the barrel, which is how the term "cock tailings" was derived.

The Joy of Mixology references a great story, published in British publication The Bartender, which tells the tale of English sailors who were served mixed drinks in a Mexican tavern.  The drinks were stirred with “the fine, slender and smooth root of a plant which owing to its shape was called Cola de Gallo which in English means ‘Cock’s tail’.”  The story goes on to say that the sailors made the name popular back in England, and from there the word made its way to America.

The term "cock tail" was used to describe an animal with a cock(rooster)-like tail, - specifically for horses with docked tails who were of a mixed breed. There are two possible connections here: racehorses with cocked tails were perky and sometimes friskier than those without (perky horse due to the shortened tail, perky drinker due to effect of the drink).

The second possibility is that the horses' tails had been changed or these cock tailed horses were of mixed bloodline (so the addition of other ingredients to change a drink and create a cocktail, or the mixing of components, is the link here). It makes sense that the term could have come from either source, but both are somewhat of a stretch. 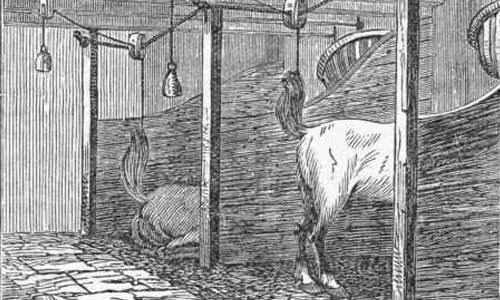 Wondrich, Jared and Gary Gillman have looked into the horse element further and a third element in connection to this usage might just prove the most convincing: ginger.

Jared states in his article for the Telegraph that “Gingering was a technique employed by horse traders to fetch higher prices for their cock-tails. A horse with a spring in its step, wide-open eyes and, most importantly, tail held high would sell for more. A well-placed thumb of peeled ginger produced the desired effect, at least until the horse was sold.”

Additionally, Gary Gillman notes that in the 1820s, English sporting writer John Badcock made a number of references to the equine “cock-tail” in his writings - he was one of numerous writers to use the term which was also popular amongst American horsing circles. Wondrich explores this further in his book Imbibe, noting that in 1828, Badcock wrote of the word but in a different context: that a “scratch or two of cocktail” was added by sporting enthusiasts to beer, gin or a mixture of both. Earlier, in 1825 Badcock had written, (seemingly, again of the drink) “cocktail is ginger”. Gary argues that the ‘ginger equation’ here is the same as the 1798 citation discovered by Jared and Anastasia: ginger being a popular synonym in England for cocktail. 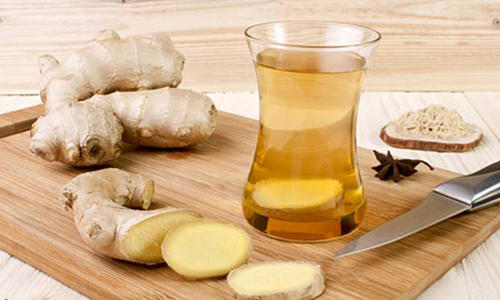 So, in England at least, the “cock-tail” referred to was the stimulant element of the drink – ginger or sometimes hot pepper – which is how we find Badcock using it in the 1800s. But in America, the name of the spicy element was extended to cover the whole shebang - as per Wondrich's 1803 discovery.

And by the time 1806 came round and the Balance reference, in America the ginger and the cayenne had been clearly been swapped for the more palatable (and as Wondrich points out, “shelf-stable, an important consideration in the American hinterland”) bitters. The English ginger “cock-tail” had become the American Cocktail…

BUT WHAT OF THAT COCKTAIL RECIPE?

There’s very good evidence that people in England were drinking brandy, sugar and bitters mixed together as far back as 1746. It just wasn’t called a cocktail. In fact, as late as the early 1900s “cocktail” appears to have been different things to different people: Cooper, in The Spy (1821) says that it included mint, while Dr. Samuel Mitchill in 1820 said it was “rum and honey, to combine sweetness with strength.” The significant thing about the Balance article is that it recorded and defined the formula that won out in the end. 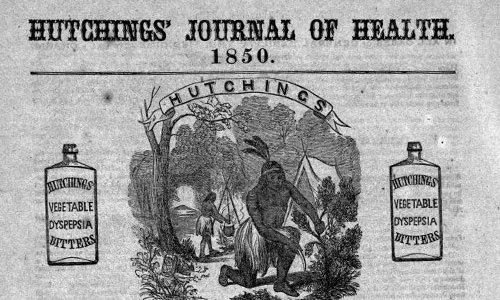 But whilst this history of the word “cocktail” is all well and good, what of the concoction itself and its defining ingredient, bitters?

There are numerous ads that appeared in London newspapers of the 1690s and early 1700s for the “Elixir Magnum Stomachicum” that a man called Richard Stoughton sold from his apothecary shop south of London Bridge.

“Stoughton's Bitters,” as they came to be called, were the same sort of concentrated extract of roots, barks, peels, and such that modern bars still dash here, there and everywhere to this day. In these ads, Stoughton recommended taking them in brandy or wine as a hangover cure. The brandy of the day was generally sweetened, which puts us perilously close to the definition of the cocktail and maybe, just maybe makes Dr. Stoughton the inventor of the cocktail recipe… Maybe. 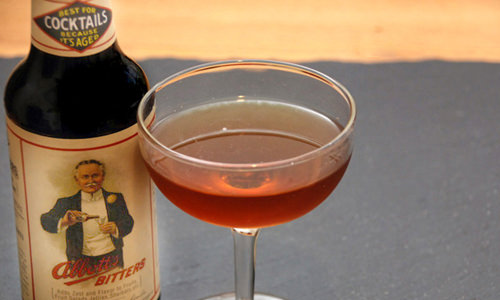 What we do know is that by the middle of the 1700s, gin and bitters, brandy and bitters, and wine and bitters were all frequently consumed on both sides of the Atlantic. They just weren't called cocktails. Yet.

If, after that mammoth history lesson, you're still feeling inspired, take a look at some of the below.

Further reading: How The Cocktail Got Its Name The Cocktail's Origin: The Racecourse, the Ginger The Surprising History of The Cocktail