The Sordid History of Gin & Mums 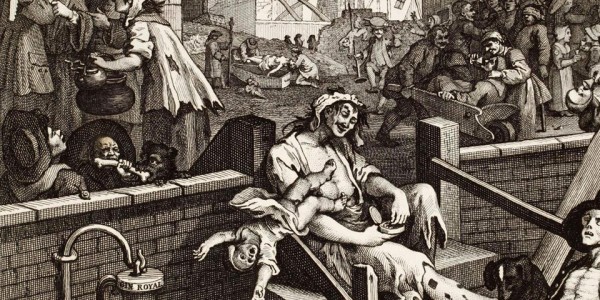 Gin and Mums have a long and sordid relationship - nowadays she might turn her phone off for a few hours whilst she enjoys a G&T or two - but back during the gin craze, it was far more likely that she would sell you to get her hands on a tipple.

Today we use the term ‘drug-crazed’, back in the 18th century London the poor were ‘gin crazed’.

Gin allowed the 18th century poor to forget the squalor and hardship in which they lived. It was a powerful drug that was cheaply and easily available. A much-quoted gin shop sign from Tobias Smollett’s ‘History of England’ reads, “Drunk for a penny, dead drunk for two, clean straw for nothing.” In the back rooms of gin shops, people were spending the night unconscious on straw (surrounded by the aroma of gin, vomit and presumably; shame).

From its earliest appearance in England, gin has had female connotations, women seemed to be falling foul of gin more often than men, and it was widely (and wrongly) considered that the spirit was more harmful for women - so it gained a feminine identity, going by names like Madame Geneva (a corruption of the dutch spirit, Jenever) Ladies’ Delight, Mother Gin and as the less salubrious effects took hold - Jenny Pisspot and Dorothy Addle-Brain and eventually… Mothers’ Ruin.

At the peak of the gin craze, the death rate in London outstripped the birth rate and it remained higher for the next decade, and as many as 75% of those babies that were born died before the age of five. Mothers who were addicted to gin were neglecting their infants or quieting them with gin and many babies were born deformed by foetal alcohol syndrome.

The origin of the term Mothers’ Ruin is widely debated - some have linked it to the use of gin and hot baths as an abortive device (eek) but most likely it comes from William Hogarth’s famous depiction of Gin Lane - who took his inspiration from the shocking case of Judith Defour as an example of the evil effect gin was having on mothers.

Judith was the single mother of two year-old Mary, living in Bethnal Green Parish Workhouse. In January 1734 she collected Mary for a day out and the workhouse had dressed the child in new petticoats and Judith promised the warden to return the child by the afternoon that same day. Instead she turned up for work that evening worse for wear and with no sign of the child. After continuing to drink gin at work, something that was not unusual, she told a colleague that she had left the child in the field. Mary was discovered dead and it transpired that Judith had strangled her with a handkerchief and stripped the child to sell Mary’s clothes to buy gin.

In 1751, Hogarth published his satirical print ‘Gin Lane’ (main image) depicting disturbing scenes of gin-crazed London - including a mother, covered in syphilitic sores, unwittingly dropping her baby while she takes a pinch of snuff - the epitome of a ruined mother.

Thankfully, the ginaissance we're currently enjoying hasn't had quite such a damaging effect - and it's a safe bet to guess your Mum will enjoy a bottle or two of these boozy gifts for Mother's Day.